The two sectors at either end of the cap-rate change spectrum in Q3 were dollar stores, up 45.1 bps, and pharmacies, which posted a -29.3 shift.

Cap rates’ upward trend continued in the third quarter with an 8-point basis gain, according to to Calkain Research’s Q3 Cap Rate report. Furthermore the trend shows no sign of abating, Calkain goes on to say.

The two sectors at either end of the cap-rate change spectrum this quarter are dollar stores, up 45.1 bps, and pharmacies, which posted a -29.3 shift. 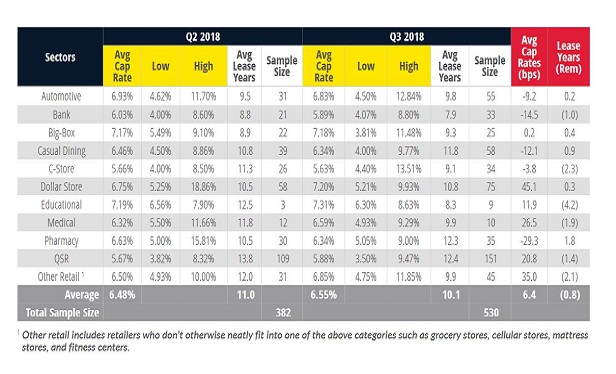 There are some concerns in the market at the moment, including the coming midterm elections, inflation and the possibility of a mid-2019 correction. Despite these concerns, the net lease market is on track for continued strong performance, Calkain says. It writes:

There is an equilibrium between buyers and sellers, even as more new investors enter the field. Buyers do what they always do: they push on pricing, and there is enough inventory out there for selectivity in their choices but without a dangerous overstock.

As for the two outliers — dollar stores and pharmacies — Calkain had this to say:

An oversupply of dollar stores has not yet resulted in a buyer’s market, but investors are becoming more selective, especially in secondary and tertiary locales, resulting in upward cap rate pressure–by 46 bps in the case of Family Dollar. Bucking the trend is Dollar General, which posted lower cap rates, down 18 bps. (These are the two biggest names in the category.) Looking at those stores with 10 or more years remaining, the picture changes with Family Dollar down by 4 bps and Dollar General is up 20 bps, larger than a previous quarter over quarter changes.

Looking at the overall picture, cap rates in the Pharmacy sector dropped by 29.3 bps while assets had on average 1.6 more lease years remaining. Most notably, there were quarter-over-quarter changes to specific brands that were larger than the sector overall, namely Walgreens, which fell by 62 bps, and CVS by 44 bps.

For assets where more than 10 years remaining on the lease, CVS was down 37 bps, while Walgreens rose 29 bps, countering its overall trend.